“The Type Directors Club is an international organization for all people who are devoted to excellence in typography, both in print and on screen.”

Shown above are most of the current TDC Board of Directors, a couple of former members, and guests at Mike Parker’s TDC Medal ceremony, 2011.

I thoroughly enjoyed a twelve-year period of service on the board of directors of the Type Directors Club in New York City, retiring as Chairman and past President. It was a distinct honor to be able to promote expressive, revealing, artistic typography by, among other activities, ensuring the three global type competitions continued to define the state of the art. I also served as Chairman of the design competition in 2003, whose judges were Bob Aufuldish, Marianne Besch, Rodrigo Corral, Brian Diecks, Mark Geer, Guto Lacaz, and Nancy Skolos. 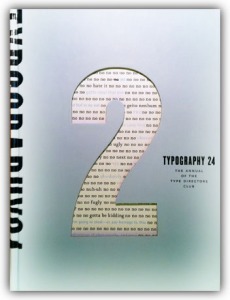 Typography 24, the Annual of the Type Directors Club showing the winners from the 2003 competition, was designed by Alex Isley, and has achieved a collectability status: it is consistently the highest-priced TDC Annual on eBay.