How to Spec Type

“This book should not be used as a typographic swipe file. It should stimulate a flow of ideas.” 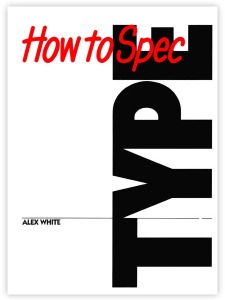 How to Spec Type describes a process that became outdated with the evolution of page makeup software in the years after the introduction of the Mac in 1985. In those days, typewritten manuscript copy with typesetting specifications was sent to specialized typesetting houses. The finished typeset copy was returned the following day. After the inevitable corrections and changes (designer’s errors or simple changes-of-mind, called “author’s alterations,” cost extra), new proofs were output and the type was pasted onto mechnicals which were then photographed into film negatives and converted into printing plates.

This book describes the techniques and largely mathematical processes used to specify type. It was the first – and only – book on the subject. Watson-Guptill Publications, ©1987, 35,000 copies. Out of print.

These charts were typical tools of the trade supplied to designers to aid their type specifying. It was in the designer’s best interest to get the math right on the first pass, else extra charges would be incurred. Type houses would always have copies of charts similar to these to ensure accuracy from their clients. My everlasting thanks to Don Dyer of Mono Typesetting for his help in the more obscure, exotic areas of type speccing, which only a true professional’s professional would know, and which made this book far better than it possibly could have been without his recommendations.